There is currently a new copy of Kameo selling for $13.49 on Amazon. There is also a “collectible” copy selling for $29.98. The collectible copy is the same as a new copy, but it is being sold for more money. Selling collectible copies of games makes sense when the game at hand is scarce or at least from a previous generation of consoles, but Kameo is a three year old game from the current generation of consoles. Collectible copies shouldn’t be sold if there are still new copies of the game being sold. I’m just wondering if anyone is actually dumb enough to buy the “collectible” copy instead of the new copy when they are the same exact thing.

I recently picked up a copy of Prey. When I removed the packaging I noticed that the instruction manual was bent at the bottom right corner. This got me thinking, “Why do publishers even bother including instruction manuals?” I remember reading through the instruction manuals of all my new games on car rides home when I was a kid. It was a good way to find out the controls, the story, and get a good feel of what the game was all about.

Instruction manuals had a lot more weight in the infancy of video games. They weren’t just a set instructions; they were the way you found out the controls, the story line, and all the features the game had to offer. Manuals had much more importance up through the 8-bit era, as many systems didn’t have the resources to do in-game what the manuals could accomplish. The instruction manual was no longer the only way developers could tell the story or introduce the game’s controls once the Super Nintendo and Genesis were released. It has become more feasible to have cut scenes explain the story and have an introductory level explain the controls as consoles’ technologies have improved. Also, bestiaries and galleries are commonplace as unlockable material in many games today, as opposed to previously only being available in the game’s manual.

Video game instruction manuals may not be obsolete, but they have definitely lost much of their importance throughout the years. They seem to be an artifact of gaming’s past, but will always have a small role in video games. After all, I would feel a little bit ripped-off if I opened a brand new game only to find a lone disc inside.

I’ve been playing Super Mario: The Lost Levels for the past week and I’ve loved every second of it. Some of the levels have individually taken me a couple hours to complete on their own; not entire worlds but single levels (ie 4-4). So now I’m on world 8, which I’m assuming is the last world, and I am now stuck on the first level. 8-1 shouldn’t be any harder than the other difficult levels; it has an area where there are two Bullet Bill cannons, followed by a Buzzy Beetle, followed by a Red Piranha, followed by a Hammer Brother. This area isn’t impossible, it just takes precision to dodge all of the enemies and attacks. The area directly after, however, is where the player must make a running jump over the below abyss and land on a Red Koopa Paratroopa in order to make the extra distance to land safely on the next patch of ground (as shown in the below screenshot). This would seem easy enough, the player just has to jump at the last possible moment in order to reach the Koopa, but the Koopa pattern isn’t predictable at all. 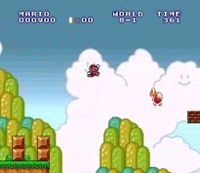 It is impossible to see the Koopa before making the blind leap. Once you jump, all you can do is hope the Koopa will be in place for you to land on it but this doesn’t happen often enough. Most times I have found myself just falling to my death. I have tried approaching the edge before stepping back and running to the jump hoping this will trigger some predictable pattern, and I have equally tried just running up to the edge and immediately jumping; either way, there is no sense of predictability as to where the Koopa will be when he appears on screen.

This scenario isn’t difficult, it is terrible game design. Making the player blindly jump to an unpredictible target is too much to ask for. I prefer the outcome of a video game I’m playing to be determined by my skill, not my luck. It is comparable to bad camera angles in today’s 3D games. This one area isn’t enough to ruin what has been a great experience thus far, but I just hope the rest of the game doesn’t pull out cheap design to maintain the difficulty.

Here is an excerpt from a senior project of high school, grammatical errors included:

This is about two and a half years old now. The project was a simulation of the year after high school, assuming the participant didn’t go to college and started working right after graduation. This portion is from the reflective essay on how I felt about the project. I just found it funny how I compared the project to putting San Andreas into an NES cartridge.

I recently watched the IGN commentary on Killzone 2 and I noticed that everything was dark and gloomy until I saw a bright red barrel. You guessed it, that barrel exploded with one burst of bullets from an assault rifle. Explosive barrels in video games have always been a pet peeve of mine. Unless the game’s plot places you at an oil refinery, a science lab, or something along those lines, there isn’t much reason for you to be surrounded by bright red barrels filled with flammable substances. Games that don’t take themselves too seriously can go right ahead and use explosive barrels. But when I find myself falling into a game’s story it just takes me right back out when I see an explosive barrel…they just make no sense. Why do all diabolical masterminds have a need to stockpile explosive barrels? Do they plan to ship all of the barrels to an important building and lodge a bullet into one, resulting in a chain explosion? Why not invest in a plane and a bomb?

Explosive barrels are an important part of gaming history; they were one of the first efforts to create an interactive environment. Developers can now make smarter decisions on how to have a better interactive environment. In Resident Evil 5 I saw that you can shoot air conditioners to have a falling electrified box plummet onto your opponent. In essence, an air conditioner is just like an explosive barrel but it at least makes the tinniest bit of sense.

Perhaps I’m putting way to much thought into it, but explosive barrels in today’s games just annoy the piss out of me.

SIDE NOTE: Explosives barrel gang bangs are fun to watch.